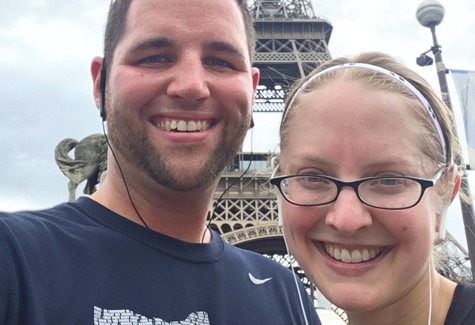 Bryan Shields, UniPrint’s Shipping and Receiving Manager, never thought he would run a half marathon. Shields considered himself a treadmill runner, who occasionally hopped on the machine just to stay in shape.

“I hated running outside,” Shields said. “I didn’t appreciate being outside. I was afraid of getting lost or afraid of going out and getting hurt or getting too tired.”

Then in March of 2014, his path changed when he met Jessica Kleinman, a woman who had an appreciation for nature’s beauty and the sights that an outdoor run could provide. Shields quickly realized if this was the girl he was chasing, he needed to find a way to keep up.

Their runs together took place several times a week, but nothing more than a few miles.

“We were three- to four-mile runners. I only felt like I could do that distance.”

But in 2015, during a casual conversation with a friend about running, Shields was provided with a statement that stuck with him.

“Shields, I think you can do a half marathon,” the friend said.

Instead of shrugging it off, he took it as a challenge. It was a challenge Shields decided to undertake with his girlfriend, Kleinman, who had never run 13.1 miles either.

The training was tougher than expected.

“Several times I wondered how the heck I was going to do this.”

Eventually though, they worked up the ability to run nine miles. That’s when they felt confident enough to sign up together for the Nationwide Children’s Hospital Half Marathon in Columbus in the fall of 2015, a race they finished together.

In March of 2017, the running teammates became a married couple. On their European honeymoon in September, the pair toured parts of Paris, London, Rome and Sorrento, Italy with their running shoes and headphones, while training for their third half marathon together.

“It’s my favorite way to explore a city, to take a run. Every long weekend we’ve gone on, I think we’ve found a way to go on a run. Some people question that we’re running on vacation. It’s just something we like to do.”

In October, Shields crossed the finish line of his third half marathon. He did so with his wife cheering from the sideline, after back and knee injuries kept her from the race. Still, it was an accomplishment achieved together.

“I don’t know if I would have done any of it without her. It’s been such a bonding thing for us. It’s been so important to our relationship.”

Not long ago, Shields wouldn’t dare run on anything but the rubber of a treadmill. But what a run the last three-and-a-half years have been!

“It’s been the world. It’s even more special that I’ve shared it with my wife.”

A Diploma's Path Gets Personal at Ohio State

Running Into Love
Join Us for an Open House

In the News: New Stitcher Boosts Efficiency at Ohio State